Popular spiritualist Patricia Asiedu widely known as Nana Agradaa has been granted bail,  According to reports, Komfuo Agradaa was given a self recognizance bail after she paid her license for this year (2021) and a one year advance.

A self recognizance bail is normally granted to persons considered prominent in society namely; Chiefs, Members of Parliament etc, and in situations where a suspect has been charged with a minor offence.

The granting of court bail is done at the discretion of the courts subject to the Criminal Procedure Code.

News went rife yesterday about the arrest of Nana Agradaa. She was arrested by state security with her popular TV stations, Thunder TV and Ice1 TV shut down.

The self-styled spiritualist was apprehended for illegally transmitting without licenses.

The arrest of the popular television fetish priestess was confirmed by the Minister of Communications and Digitalisation, Mrs Ursula Owusu-Ekuful in a Facebook post.

“At about 2200hrs on 20/04/2021, a joint team of Police and National Security Intelligence Operatives, in collaboration with the National Communications Authority, stormed the premises of two satellite television stations, namely, Thunder TV and Ice1 TV, who were illegally transmitting without licenses, at Kasoa in the Central Region
The team arrested the offenders among which included the owner of Thunder TV, Patience Asiedua, popularly known as Nana Agradaa and seized two (2) equipment each used in the illegal transmission from both premises. Nana Agradaa advertises her “Sika Gari” on her TV station, which she claims is her personal god that multiplies money with some rituals she makes. She has hence admitted to this illegality and is currently in custody assisting with further investigations.
The influx of unregulated television stations on air have led to promotion of certain content which may affect public order, public morality and the rights and reputation of others. As such, efforts are underway to rid the system of this canker and reduce overcrowding on Ghana’s airwaves.” She wrote. 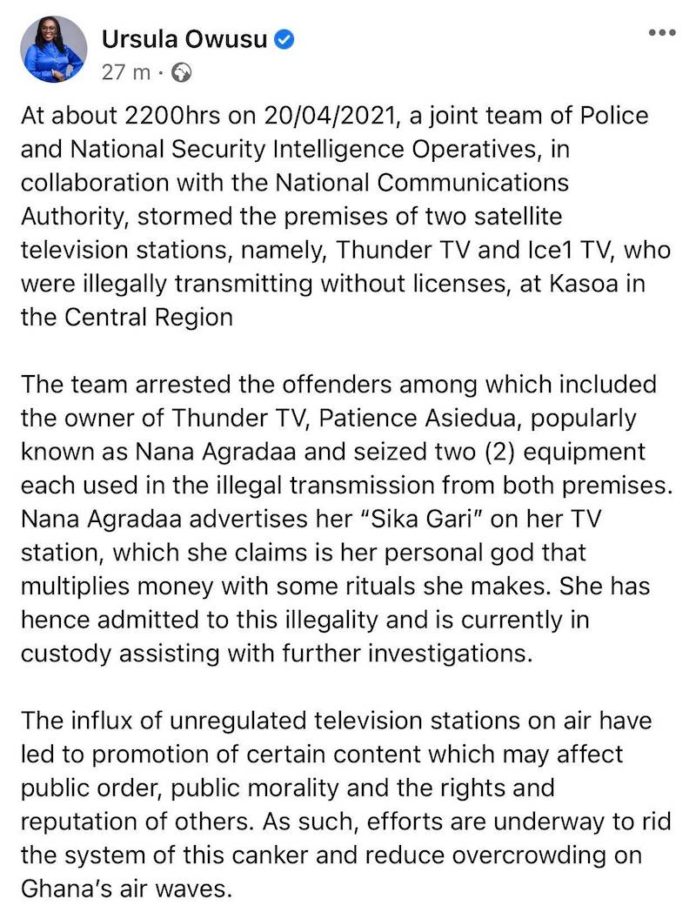