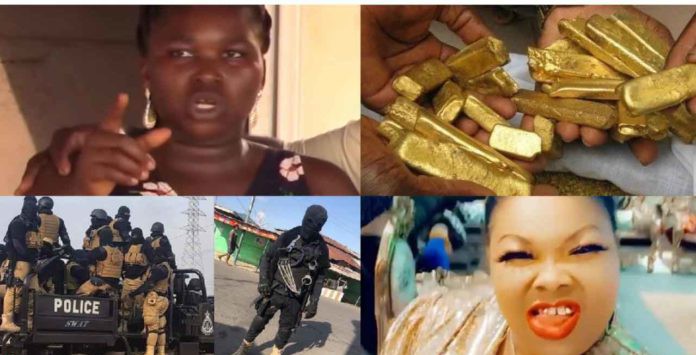 A lady by the name of Sarah has accused scammer fetish priestess Nana Agradaa born Patricia Asiedu of stealing her $7M worth of gold.

According to her, the gold was given to her by the grandmother on a condition to seek someone to bless it for her.

Deeming the gold might have been cursed, Sarah revealed she made it a point to do as directed by her grandmother when she handed over the precious mineral to her.

Speaking in an interview, the conned revealed she took the gold to Nana Agradaa after seeing her advertise on the TV that she is a problem solver.

Nana Agradaa told her after she had taken the gold to her that indeed there’s a curse on the metal (gold) and it, therefore, demands rituals before she can use it.

Sarah explains that the fetish priestess told her to bring an amount of GHc1000 so she uses to buy the needful items to be used for the rites on the gold.

Fast forwarding, the lady disclosed that to her surprise Agradaa again told her to bring an extra Ghc4000 because the initial requested amount wasn’t enough to cater for elements for ritual.

Unable to afford that huge money, Sarah, requested that her gold be handed over in addition to her already paid Ghc1000. Unfortunately, she was greeted with the beatings of her life.

Nana Agradaa ordered her macho men to beat and throw her out of her sight on the said day she (Sarah) had gone to tell the former about her incapacity to find the extra money for the ritual.

It is believed Nana Agradaa broke through becoming a rich woman after she managed to swindle poor Sarah off her gold worth $7Million.