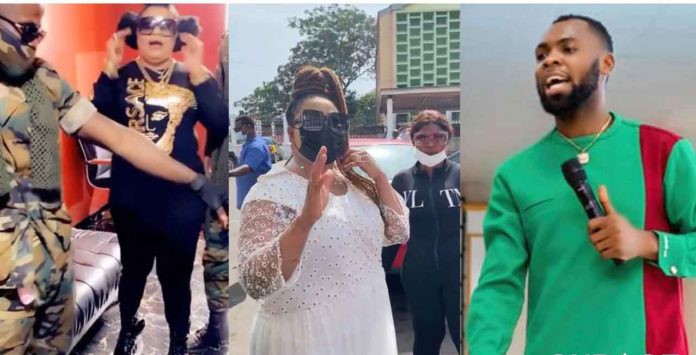 Founder and Leader of Anointed Palace Chapel, Rev Kweku Antwi popularly known as Rev Obofour has called for the arrest of Nana Agradaa shortly after her bail today.

Nana Agradaa was granted a self recognizance bail after she paid her license for this year (2021) and a one year advance following her arrest in the early hours of yesterday, 21st April 2021 over the illegal transmission of her TV stations.

Obofour, we are told has called for the re-arrest of the popular television fetish priestess for the reason that she has insulted her on social media.

The Ghanaian social media space over the past weeks have been awashed with news of Obofour and Agradaa’s beef. It gets interesting and more revealing by day.

Nana Agradaa aka ‘Abuuuzigi’ amid her ‘fight’ with Obofour insulted and dropped some wild accusations against him in a series of videos shared on social media.

Reacting to the allegations and insults, Obofour threatened to deal with her(Agradaa) with the last drop of his blood.

Obofour who vowed to deal with the Agradaa has started on an arrest note. Ghpage is keenly following the story and will furnish our cherished readers with the latest. Stay tuned.