After the dreaded Boko Haram terrorists stormed Geidam town in Yobe State on Friday, April 23, they distributed letters to residents before the attack. 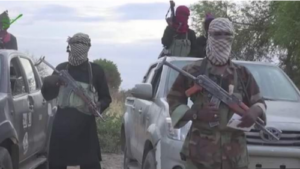 Giving reason for attacking Nigerians, the terrorist group in the letter clearly stated that they (BokoHaram) came to fight Jihad war with Nigerian Army.

Furthermore, those letters were written in Hausa language and in those letters the insurgents emphasized that they are all out to kill anyone who is stopping them from practising Jihad or anybody working together with the Nigerian security operatives.

SaharaReporters obtained the notice circulated by Boko Haram from a resident, whose summary reads, “We are fighting Jihad war; we are only going to attack the military, their collaborators and anyone who prevents us from carrying out our Jihad.”

“The copies of the letter written in Hausa were distributed to residents of Geidam on Friday late afternoon before the attacks began,” a source revealed.