Home » Headlines » ‘I wish I could have done more for him,’ says man who helped Kulani Mathebula after stabbing 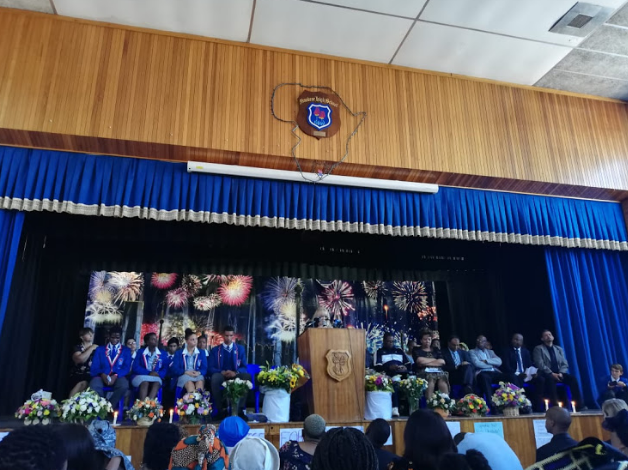 Pupils, staff and parents shared in their grief as they remembered classmate Kulani Mathebula at a memorial service at Mondeor High School on Friday.
Image: Nonkululeko Njilo

The first person on the gruesome scene where Kulani Mathebula was stabbed and ultimately died said he was sad that he couldn’t save the dying Mondeor High School pupil.

Rakeshh Dhevalall said he wished he had the medical skills that could have helped him save the teen’s life.

Dhevalall was speaking at the Mondeor High School hall, which was packed to capacity on Friday for a memorial service for the slain grade 12 pupil.

Mathebula, 19, was stabbed on Wednesday morning on his way to the school. Three pupils have since been arrested.

“I realised that he had been stabbed and I tried to look through the stab wound. Unfortunately I am not trained in first aid … I think it is important for us to actually learn these sorts of things.

“My only wish is that if I could have done more to save his life, we wouldn’t be here. This would be an empty hall right now,” he said.

Dhevalall said he had been on his way to drop off his two children at a nearby school. He said he was shocked when vehicles just drove past Mathebula, who was lying helpless on the side of the road.

When he stopped, he saw that Mathebula was in a bad way.

“At first I thought that he was having a fit because … he was convulsing. He was lying with his face down, so I tried to turn him a little bit to the side, thinking that he would be able to breathe a little bit easier if he was actually having a fit,” he said.

Dhevalall recalled how he knelt besides Mathebula as he attempted to get a response after asking if he was okay.

“His eyes were open. He was still moving at the time,” he said.

Moments later the teen started losing his vital signs, according to Dhevalall.

“As I started turning him over, that’s when I could start to see the blood all over his shirt,” he said, sobbing.

Hearing of her son’s last moments alive proved to be unbearable for Kulani’s mother, Dumi Chauke, who had to be comforted and held by relatives.

The grieving mother – who was overcome by emotion – battled to keep still in her seat.

“I would like to let Kulani’s mom know that I tried comforting him as much as I could. There was a point where I could see that he was struggling to breathe. I tried checking for the pulse and I couldn’t feel anything. His eyelids started to close,” he said.

“All I could do at that point was say a prayer for him, and I hope that gives Kulani’s mom some sort of comfort. I tried as much as I could for him and I am sure he is in a better place now,” he added.

“They [his killers] should not be tried as children, that’s my answer,” he said.

A grade 8 pupil whose letter was read out at the service, described Mathebula as a brother.

“He did not deserve to leave the world like this. He was another victim to a hectic crime. Who is next? Are we safe?” she asked in a letter.

Mathebula will be laid to rest in Limpopo on Sunday, according to Chauke.