Home » Entertainment » SO SAD! Widows In This Culture Are Forced To Marry Their Brothers-In-Law 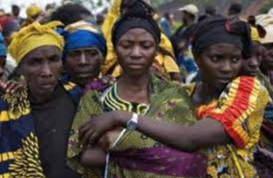 Widow inheritance or Bride inheritance is a cultural and social practice whereby a widow is obliged to marry her husband’s brother.

The practice was meant as a means for the widow to have someone to support her and her children financially and to keep her late husband’s wealth within the family bloodline.

At the time it was initiated, women were responsible for the house chores, and men were the providers, therefore if the woman lost her husband, she would have no one to provide for the remaining family.

Because her in-laws would not want someone outside of the family’s bloodline to inherit her late husband’s estate, she was required to marry within the family. might only occur if a man died childless, in order to continue his family line.

The anthropologist Ruth Mace also found that the practice of widow inheritance by younger brothers, common in many parts of Africa, serves to reduce population growth, as these men will be forced to marry older (and hence, less fertile) women.

In some parts of Nigeria, it is a common practice for a woman to marry her late husband’s brother if she had children.

This enabled the children to retain the father’s family identity and inheritance. Although less common today, it is still practiced. It is considered a custom of the Yoruba, the Igbo, and the Hausa.

Under customary law among the Yoruba, A brother or son of the deceased husband was traditionally allowed to inherit the widow as a wife. The inheritance of the youngest wife of the deceased by the eldest son continues to be practiced in Yoruba land.

Under Igbo customary law, a brother or son of the deceased Igbo husband was traditionally allowed to inherit the widow as a wife. This tradition is also considered in the tradition of the Urhobo people, a major ethnic group in the Delta State.

This can have various forms and functions in different cultures, serving in relative proportions as social protection for, and control over, the widow and her children. She may have the right to require her late husband’s extended family to provide her with a new man, or conversely, she might have the obligation to accept the man put forward by the family, with no real prospect of turning him down, if her birth family will not accept her back into their home.