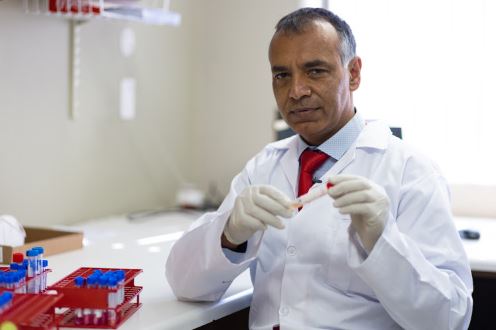 Prof Shabir Madhi of Wits University, lead researcher on the Covid-19 vaccine trial that starts in Johannesburg on Wednesday.

Speaking during a webinar on MyHealthTV, says there are likely a million South Africans with Covid-19 at the moment.

“For example, we have a five to six-fold lower rate of testing than in the UK. If you look at Nigeria, their population is four times higher than ours but their rate of testing is 40 times less than SA’s so it is incorrect to make any sort of comparison between countries,” Madhi said.

According to him, one has to factor in the rate of testing and thus cannot compare countries.

“When we say we have reached 100,000 cases, that is a complete underestimate. In my estimate, it is close to 10 times more around a million people. There is increasing evidence that many are asymptomatic but are still spreaders,” he further said.

Madhi who is leading the first SA vaccine trial gives a realistic account of what people can expect.