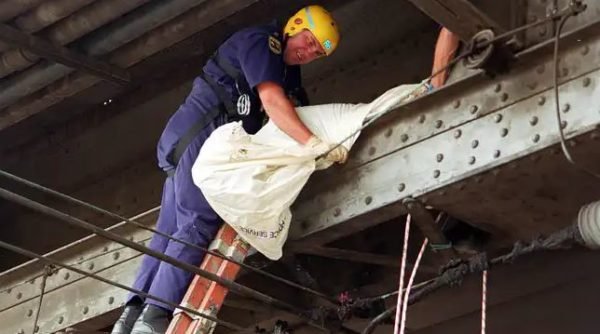 An alleged cable thief who tampered with railway power lines got electrocuted to death.

When paramedics arrived at the scene, all they found was a badly burnt body.

The incident occurred on Tuesday around 1.35pm. The lines that link Ekurhuleni and Joburg with Isando Industries, O.R. Tambo International Airport and Pretoria could not operate as power had to be switched off to allow paramedics to remove the body.

City of Ekurhuleni Disaster and Emergency Management Services,  Willie Ntladi said they received a report around 1.35pm that a man had been electrocuted at Elandsfontein train station.

He also explained how they lowered the “charred, stiff body” from the power lines to the ground with two high angle rescuers climbing the ladder to reach him. After reaching him, a spare safety harness was put across him so he could be lowered safely down to the ground.

“Loose snapped power lines could be seen hanging from switch structures. What is alleged to be the deceased’s operational tools were found directly on the railway line under where he was hanging.

“Paramedics on the scene declared the patient dead and he was handed over to forensic pathologist for the removal to an appropriate facility in Germiston.

“The case has handed over to the South African Police Services` officers where the inquest docket has been opened,” he said.