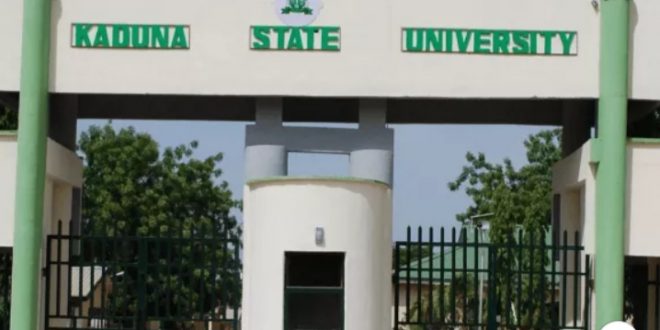 The Kaduna State University (KASU), said it has expelled about 80 students, for various forms of examination malpractices engaged in during the 2018/2019 academic session.

Professor Ahmed Ahmed, coordinator of the Kafanchan campus of the institution, stated this on Wednesday, at the 2019/2020 matriculation ceremony for new students in Kafanchan.

The matriculation of the new students was done simultaneously in the Kaduna and Kafanchan campuses of the institution.

Ahmed noted that 10 of the 80 students expelled were from the Kafanchan campus, saying that it is a sad development considering the stiff competition for admission into the institution.

“With the increase in students’ population over the years, comes serious challenges, the most disturbing being the issue of examination malpractices.

“In the 2018/2019 session alone, about 80 students were expelled from the university for various examination misconducts; of this number, 10 came from the Kafanchan campus.

“This development is sad, given the stiff competition students have had to face in gaining admission into the institution,” he said.

He also stated that the university is grappling with the menace of cultism, use of illicit drugs and banned substances, despite its zero tolerance for such vices.

“As you take your oath this morning, I want to remind you that KASU has zero tolerance for all the vices mentioned earlier and you should steer clear of them.

“Face your studies, because that is what you are here for, and I wish you the best in your studies,” he added.

Also speaking at the occasion, deputy vice chancellor, administration, Professor Yohanna Tella, who represented the vice chancellor, Professor Muhammad Tanko, said a total of 4,650 students were formally admitted into the ceremony, with 700 of them in Kafanchan Campus.