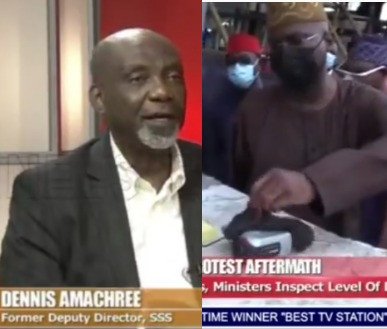 Former Deputy Director of the State Security Service in Nigeria, Dennis Amachree, says the Camcoder that was found by Minister of Works and Housing, Babatunde Fashola, at the Lekki tollgate on Sunday, October 25, looks like it was planted at the scene.

Fashola alongside SouthWest governments and Ministers from the SouthWest had paid a condolence visit to the Lagos state governor, Babajide Sanwo-Olu, over the wanton loss of lives and properties in the state after hoodlums hijacked the #EndSARS protest in the state. Among the places destroyed was the Lekki tollgates.

While inspecting some of the government-owned facilities that were destroyed, Fashola discovered a ”Camcoder” at the Lekki tollgate.

Many Nigerians expressed shock that it was the Minister who found the camera days after the tollgate was set on fire by the hoodlums.

In an interview with Channels TV this morning, Amachree said the camcorder discovered by the Minister looked planted.

”After so many days, we saw a camcoder in plain view.  Are they saying that camera was there and nobody knew about the presence of that camera? It was in plain view and the Minister went and removed it.

How come it was there and nobody saw it. There are mobile phone providers that went there to look at their lines that were damaged. Nobody saw that camera. It is not so tiny.

I am very interested in that camera. What is in it? Whoever planted it there must have also loaded it with something” Amachree said

Watch the video of him speaking in the interview below