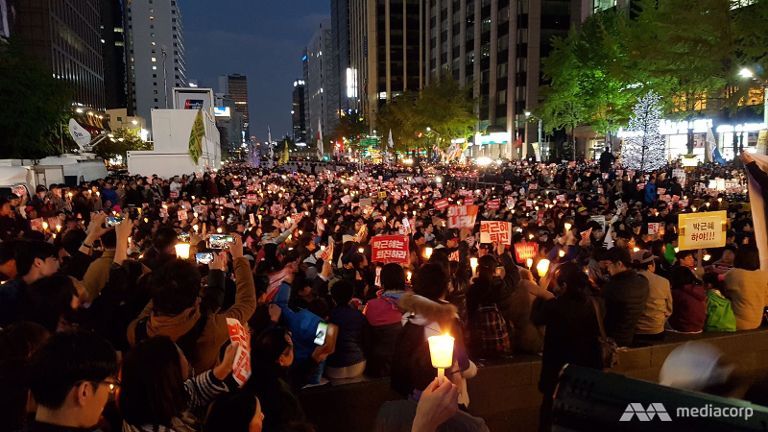 Thousands of protesters held a candlelight rally in the South Korean capital on Saturday (Oct 29), calling on President Park Geun-hye to step down over allegations that allowed a close personal friend to meddle in state affairs.

South Koreans took to the streets despite a public apology by Park late on Friday. Teenagers in school uniforms, college students, labour activists, and middle-aged couples with young children joined the rally, carrying banners and chanting “step down Park Geun-Hye”.

“I came here today to show how angry I am,” said Lee Ji-Hu, a 33-year-old housewife from Gimpo, northwest of Seoul, accompanied by her husband and two infant children in strollers.

“How can a leader have a shaman, or someone linked to a religious cult as a secret advisor and let her handle state affairs and squander taxpayers’ money like that?” Lee said.

“I feel so ashamed … I can’t let our country where my children will live be corrupted like this,” she added.

Koreans sing 'We need change' at a candlelight vigil in Seoul calling for President Park to resign over a growing corruption scandal. pic.twitter.com/AcCq75F1SA

The scandal centered around her long-time confidante Choi Soon-Sil who is officially being investigated for using her ties with Park to coerce companies like Samsung to make large donations to two non-profit foundations she set up – allegedly for her personal benefit.

Earlier on Saturday, South Korean prosecutors had raided the homes and offices of senior advisers to President Park. They confiscated computers and documents from the homes of a top presidential adviser and two other sides, as well as a deputy culture minister, said Yonhap news agency.

South Korea’s presidential office said on Saturday it was cooperating with prosecutors’ investigations into key aides.