Home » Entertainment » SAD! Widows In This Culture Were Burnt Alive With Their Dead Husbands, SEE WHY [PHOTOS] ​ 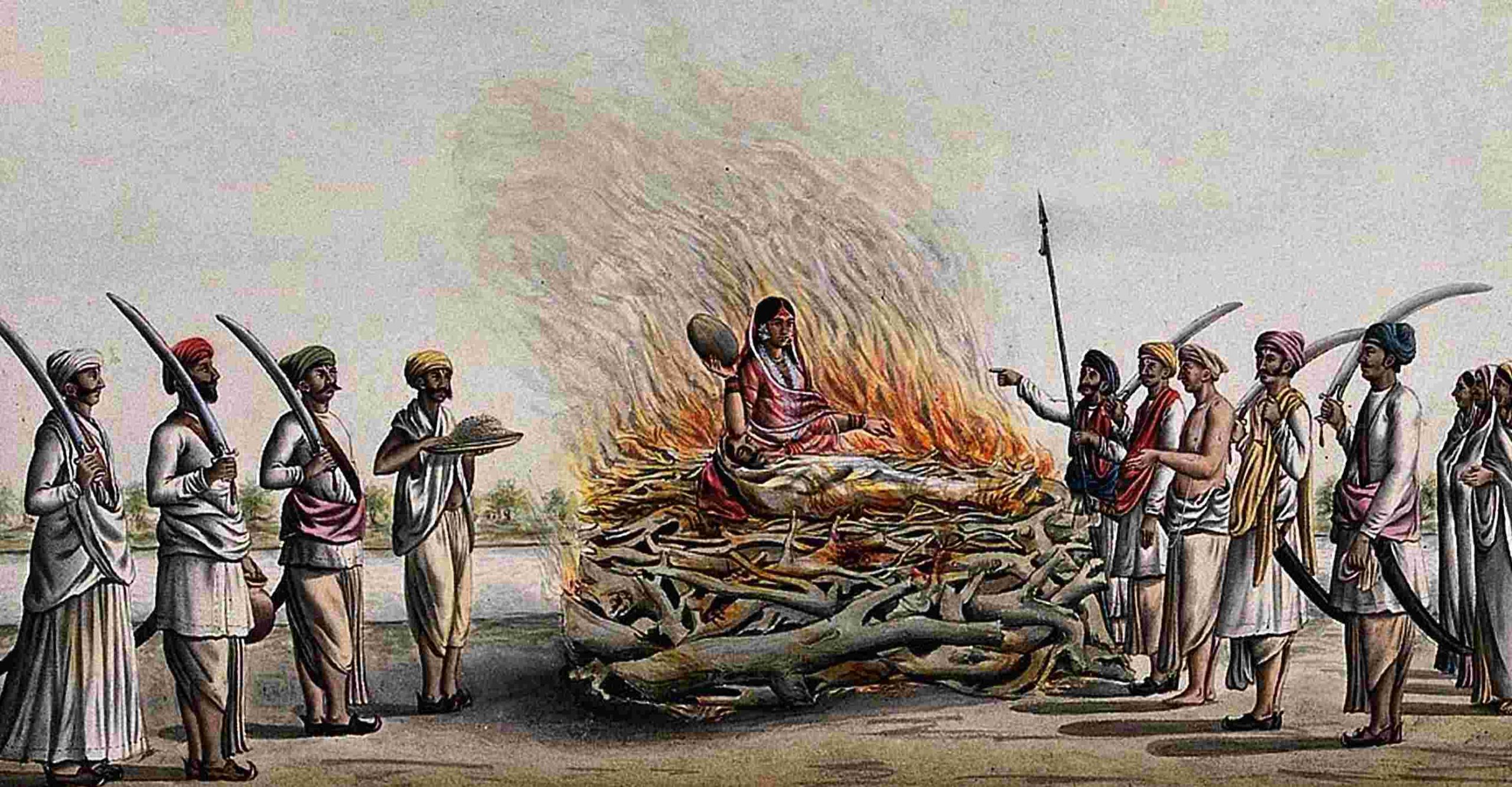 For so many years, the rights of women have been trampled upon. Women are always been criticized and punished for crimes they knew nothing about. It is no longer news in most countries that whenever a woman’s husband dies, the source of his death is always linked to his wife. Why is it like that in most cultures?

Sati or suttee is an ancient Indian practice in which a widow gets herself burnt to ashes during her late husband’s funeral pyre. This, the widow would do by setting herself on fire while his corpse is being burnt.

There were several ways of performing the Sati- She was first required to place her hand on the Sati stone for remembrance; next, she had the options of drinking poison, cutting her neck with a sharp object, or allowing herself to be snake-bitten.

Thereafter, she could either lie next to the dead body, walk into the pyre, or sit on the pyre and light herself.

Some communities perform the last honor by building a hut for the woman and her deceased to perform the pyre. Other place the name on the pyre while the woman walks into it.

Introduced between 320 to 550 CE, during the reign of Gupta Empire, Sati is named after the mythical story of Sati (meaning purity or true), Lord Shiva’s wife who burned herself as proof of her love for her husband as opposed to her father’s stubborn hatred for him.

This was seen as the purest form of love. This act, hailed as heroic, was first adopted by the royal families of the Kshatriya caste before it became forcefully practiced between the 15th and 18th centuries.

Interestingly, unlike the families of the Kshatriya, the women of the Brahmin caste were excluded from this practice because the Brahmins believed that because they belonged to this caste (also regarded as a high caste), their caste allowed them naturally attain purity hence there was no need to perform Sati.

While Sati spread to Russia, Fiji, and Vietnam, some historians claim that this practice might not have been indigenous to India but brought to them from some other cultures like Scythian invaders earlier in their history.

Aharon Daniel argues that the Scythians not only adopted the Indian cremation process of a funeral but “started cremating their dead with his surviving lovers.”

Another school of thought believes that concubines and wives of warriors who committed suicide upon hearing that their lover had died in battle made this adoption easily penetrable. If the man had several wives, only one of the wives, his preferred was granted the privilege of being immolated with him. 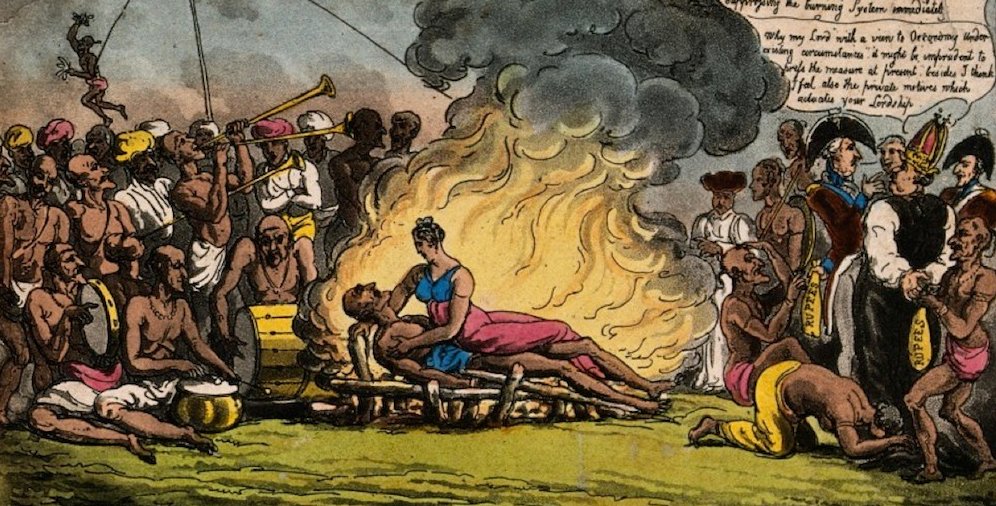 The wife who performed this was also envied by the others and her family was treated with respect. Widows who refused to die with their deceased were pressured into doing this especially if she had no children.

She could only be free from Sati if she was pregnant or menstruating. Things began to take a different turn in the 19th century after Raja Ram Mohan Roy began the fight to reform Hindu society. A feminist, he founded the Brahmo Samaj, a sect of Hinduism that believes in One God- monotheism. Fully accepting western education, he became vocal against the Sati system, casteism, child marriage, and polygamy. Instead, he advocated for widows to remarry.

His effort caught the attention of Lord William Bentick, the then Governor-General of British India, who worked with him to place a ban on Sati practice via the famous Regulation XVII in 1829 that situated Sati as illegal and punishable by courts.

Despite its ban in 1829, there were hundreds of cases of it officially recorded each year afterward. As recently as 1987, an 18-year-old girl in Rajasthan committed sati with the blessing of her family members.

The ritual involved the whole village, with them praising and encouraging the young girl till she burnt herself to death. As is the custom, the women’s relatives were treated with respect in the village. This culture is likened to the ancient Nigerian traditions of slaves and ‘free’ citizens being buried alive with their kings or master. 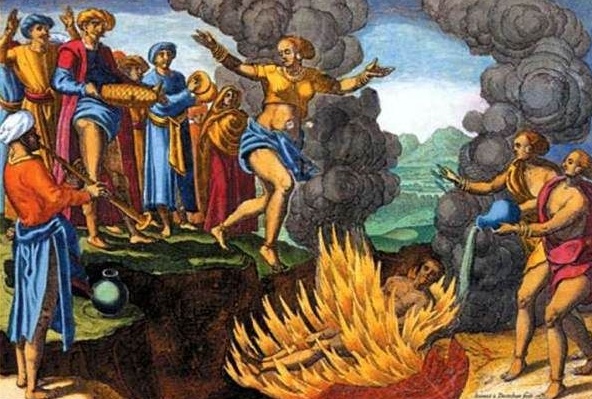 In some cultural societies in Nigeria, women whose husband are dead are still subjected to inhumane practices including drinking the water her late husband was washed with and getting her hair and intimate parts shaved.

Sati designates therefore originally the woman, rather than the rite; the rite itself having technical names such as sahagamana (“going with”) or sahamarana (“dying with”). Anvarohana (“ascension” to the pyre) is occasionally met, as well as satidaha as terms to designate the process. Satipratha is also, on occasion, used as a term signifying the custom of burning widows alive.

Two other terms related to sati are sativrata and satimata. Sativrata, an uncommon and seldom-used term, denotes the woman who makes a vow, vrata, to protect her husband while he is alive and then die with her husband.

Satimata denotes a venerated widow who committed sati. The Indian Commission of Sati (Prevention) Act, 1987 Part I, Section 2(c) defines sati as the act or rite itself.