Kuami Eugene of Lynx Entertainment has finally reacted to the latest song from his senior in the game Guru titled ‘Who born Dog’ which is a diss song directed to him and his management.

Kuami Eugene it would be remembered boldly stated that he can’t have a collaboration with Guru because he(Guru) has a problem with his boss Richie Mensah.

Guru who felt disrespected by the comment Kuami Eugene and schooled him on how to handle matters.

Many called on Kuami to apologise for his comment about Guru but he failed to do that and we believe that might have angered Guru.

The ‘Lapaz Toyota’ hitmaker this afternoon took the issue a notch higher and dropped a song.

After listening to the song, we needed no one to tell us the song was directed at Kuami Eugene.

In the song, Guru referred to Kuami Eugene as someone who doesn’t know how to dress amongst other things.

He also revealed that a single hit song from him is equivalent to the whole career of Kuami Eugene.

Well, Kuami has broken his silence and has reacted to the song.

Taking to his social media handle, he shared a photo of himself looking all swagged up with the caption which many believe is a shot to Guru.

He captioned the photo: “Psalm 34:21
For Evil shall slay the wicked,
And those who hate peace will be condemned.
Let Me Hear Amen ??
#SonOfAfrica??” 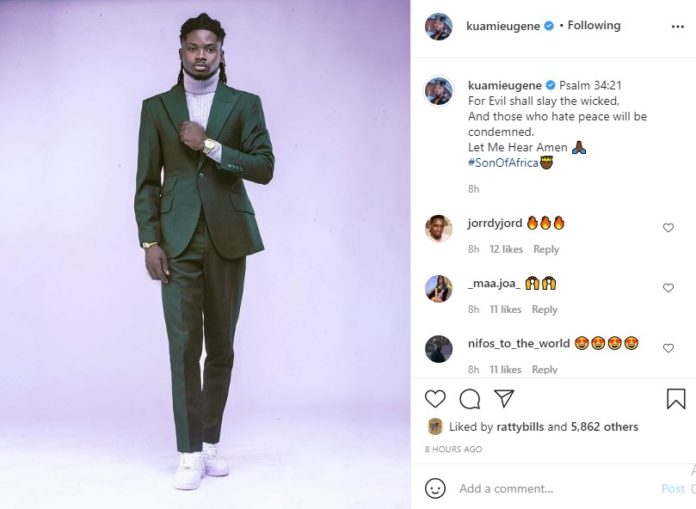