A new post by CEO of Kantanka Automobile, Kwadwo Safo, on his Twitter page shows the car manufacturing company working on a car modelled after Kelvin Odartey’s car.

A couple of months ago, the story of an 18-year-old boy who had made a sports car from scrap metals was all over the tabloids.

The boy by name Kelvin Odartey who is now a Junior High School leaver took his car to his BECE examination centre daily until the last day of his exams when his ingenuity was finally covered in the news.

Kelvin in his conversation with the media mentioned that he manufactured the car from scrap metals while acknowledging that he had both financial and hands-on assistance from his friends.

His efforts earned him a scholarship from the CEO of Kantanka Automobile, Kwadwo Safo, who was impressed by the young man’s creativity.

Meanwhile, Kwadwo Safo’s recent post takes us into one of Kantanka Automobile’s manufacturing plants where a remake of Kelvin’s innovative scrap car was being put together. 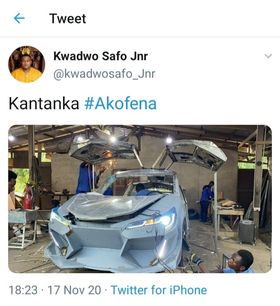 It is yet to be confirmed but it’s believed that the project was done in collaboration with the young engineer.

The car is named Kantanka Akofena according to Kwadwo Safo’s tweet and tweeps cannot wait to see how the finished product would look.