Home » Entertainment » IT IS ABOUT GIRLS! See The Strange Festival In This Town To Initiate Girls Into Adulthood!

It is the major festival of the Kaonde people of Zambia that is hosted by Senior Chief Kasempa of the Kasempa district. It is held to celebrate a new harvest and a day to honor their ancestral lineage and share the cultural wealth of the entire group.

According to custom, young Kaonde girls are not allowed to participate in the preparations towards the ceremony which starts as early as February. Also, initiation rites for girls who have just undergone puberty are held on the day.

The Kaonde are a matrilineal tribe from north-western Zambia who are known for their salt-making practices and unique houses.

The Kaonde trace their origins to the Luba Kingdom in Katanga in present day Democratic Republic of Congo – the birthplace of many Zambian tribes. The Kaonde migrated to present-day Zambia from the 16th to the 18th centuries. The Kaonde are made up of three main sub-groups who possess their own unique identities. 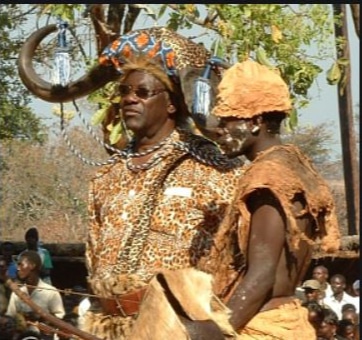 The main traditional ceremony celebrated by all Kaonde is hosted by the Senior Chief Kasempa of Kasempa district called the Juba ja Nsomo. Chieftaincy passes through the matrilineal line, which is similar to other Zambian tribes such as the Bemba.

The Juba ja Nsomo ceremony is held during the first week of June in Kasempa district. Like many other traditional Zambian ceremonies, it is mostly held to celebrate a new harvest.

In the book Ceremony! Celebrating Zambia’s Cultural Heritage by Tamara Guhrs (2007), Chief Kasempa’s son, Benson Mushitala Kasempa states, “On this ceremony the chief blesses the food and the land. In his blessing the chief indicates to the people that all fierce animals should sleep and should not go and feed on human beings. The chief prays to the ancestors and asks for protection for his people. Whoever is on that land is protected.”

In the same book, Gladson Matabishi Shantaba from the council of chiefs states, “When the chief tastes munkhoyo (traditional beer) some of it is spilt on the ground as libation to the spirits. The chief drinks and sprays some in the air to give praise to the heavenly God for having given them the strength to cultivate and have the chance to harvest and brew beer. They drink at intervals and then go back to work. Then we dance!”

Like the Luvale tribe, when a young Kaonde girl from a rural area has her first menstrual cycle, she goes through an initiation period called Kisingu. She is kept in isolation for about a week in a wooded area where she sleeps under a selected tree on a mat and is covered in chitenge, a patterned cotton cloth. She is unveiled at the Juba ja Nsomo ceremony. The older women from her community perform the machancha dance.

In the past, a stick with a white flag would be hung signifying that she was ready for marriage. As early marriages are now illegal, no match is made for the girl.

Like many other Zambian tribes, the Kaonde name their children based on circumstances that take place when the child was born, or name them in honor of an ancestor or living relative. Typical Kaonde names include Butemwe, which means ‘love’, and Kapijimpanga, which means ‘hunter’.

The Kaonde have several dances that are performed at the various traditional ceremonies. Katembo is performed by men and older women. The music is described as similar to reggae. The mutomboko is a special dance that honours hunters after a successful hunt. The shonongo dance requires a partner and is similar to ballroom dancing. It is also performed at the Juba ja Nsomo ceremony.

The Kaonde are known for their unique traditional houses. Typically Kaonde houses, or lukelo, were made out of termite mounds and dried grass. A nkunka house is made entirely out of grass. 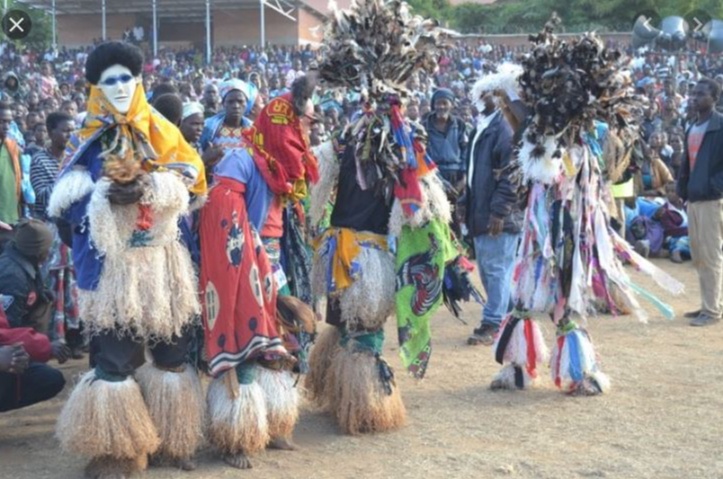 The Kaonde are a matrilineal tribe, meaning kinship is carried through a mother’s line. Typically a wife and her new husband would live in her mother’s village after marriage, although today, as a result of urbanisation and the rise of inter-cultural marriages, modern couples may choose to live in larger cities around the country.

There are eight forms of kinship recognised by the Kaonde. According to The Fractured Community: Landscapes of Power and Gender in Rural Zambia by Kate Crehan, these are: “inanji (mother), mwisho (mother’s brother), kolojanji (older sibling), nkasanji (younger sibling), mwana (child), mwipwa (nephew or niece), nkambo (grandparent), munkana (grandchild).” 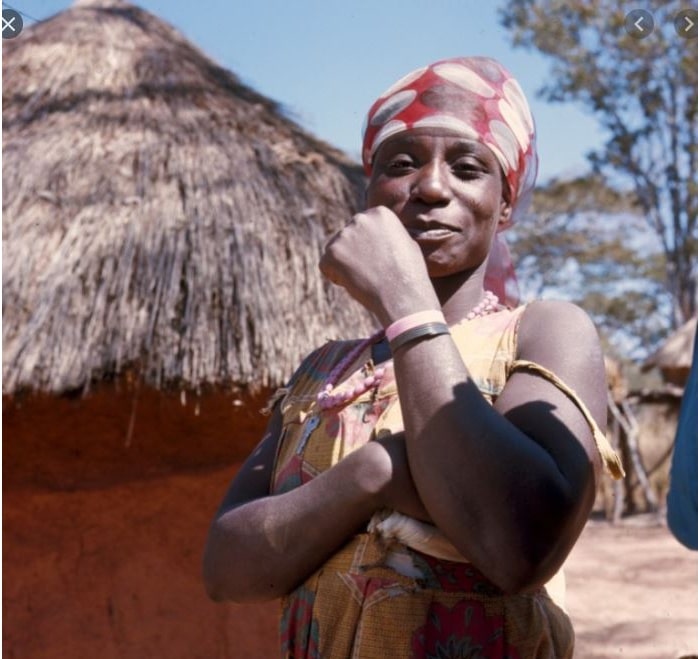 Sorghum is considered the staple food of the Kaonde. Sorghum is used as the main ingredient in the production of traditional beer called munkhoyo, which is mostly consumed at the Juba ja Nsomo ceremony. Other foods consumed include millet, cassava, beans, maize and fish. The Kaonde would practice a form of slash and burn farming method similar to the Bemba tribe’s chitemene.

Traditional salt-making is unique to the Kaonde people and is a skill passed on to younger generations. According to Guhrs: “The women who know this art have gathered soil from Kaimbwe Salt Pan.

They burn the earth and put the ash through a dish with holes. Water is then sieved through until it comes out clear. They then boil the mixture on the fire until all the moisture evaporates, leaving the salt. The salt is then made into cone shapes and heated until it is solid, making a type of salt rock called nsumba.”