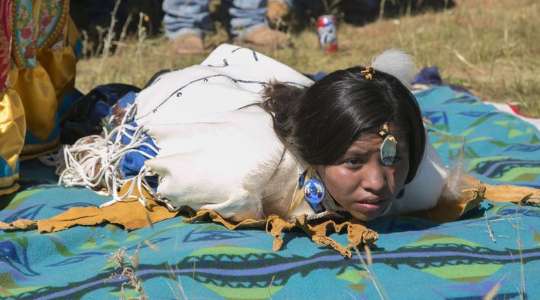 The history of the Apache tribes dates back to many years ago when they fought the invading Spanish and Mexican peoples for centuries.

Historically, the people who became the Native Americans migrated from Asia across a land bridge that may have once connected the territories presently occupied by Alaska and Russia.

The Apache Indians, most of whom now live on reservations in New Mexico and Arizona, believe that their earliest ancestors emerged from the underworld by climbing up a cane stalk behind the Red Ants, also known as the First People.

She is said to have appeared in the east as a beautiful young woman, moved to the west, and disappeared when she was old.

Changing Woman is the primary deity in the Apache religion. She is embodied as the earth itself.

In July, ceremonies are held at both the Arizona and New Mexico reservations to celebrate the coming-of-age of young Apache girls after their first menstruation (the “moon cycle”).

Although in the 1800s the U.S. government forbade the Apaches to congregate, in 1911 they were granted permission to get together on July 4th to celebrate the nation’s birthday. 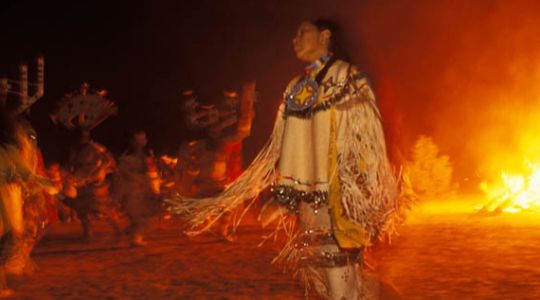 They chose this date for one of their most important cultural rituals as an insult to their conquerors.

For the four days of the “getting her ready” ceremony, the mythical power of Changing Woman is believed to enter these girls’ bodies, giving them the power to heal those around them.

Their faces are painted with white clay, and each girl is blessed with sacred ‘Cattail Pollen’.

They wear a piece of Abalone shell above their foreheads and act out the role of their mythical female ancestor as they prepare for their lives as adult women.

The size of these ceremonies is one of their most distinctive traits: dozens of people may attend, and they must be fed for the four days that the ceremony lasts.

In addition, singers, musicians, and dancers are hired, so the cost of the celebration is significant.

Some families find it beyond their means, and this is one reason why the ritual is less common than it used to be. However, in many cases, the extended family will help underwrite the expense.

Financial assistance may also come from the woman who serves as the initiate’s sponsor.

This figure is usually a mature friend of the family who aids the young woman throughout the ceremony and is somewhat similar to a godmother. 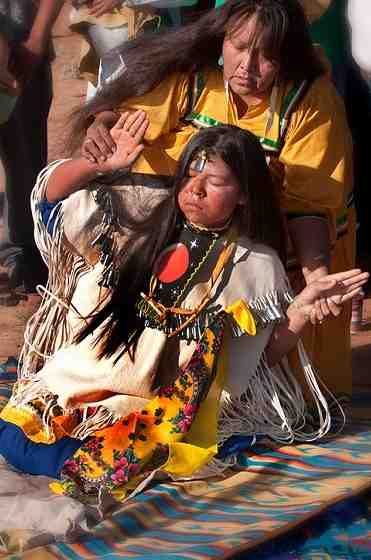 On the first day, a symbolic tipi is constructed to house the ritual activities that will take place.

Soon after, a medicine man blesses the ceremonial dress that will be worn by the girl, a cane, and various other sacred items used in the ceremony.

On the morning of the second day, the sunrise dance is performed by the girl and her sponsor.

It is during this dance that the girl is believed to take on the powers of Changing Woman, which she then uses in blessing the sick. 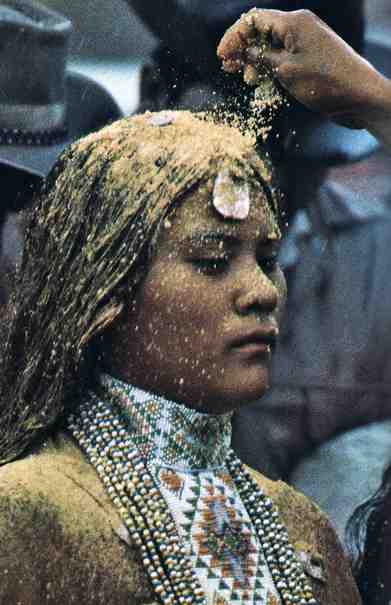 The initiate also receives blessings, which take place when adult guests at the ceremony sprinkle cattail pollen on her head.

Throughout the four days of the ceremony, the initiate must observe certain guidelines that are related to the sacred quality she is believed to possess.

She can only drink through a straw because if she touches water directly, it’s believed that she will bring rain.

If she scratches her skin with her fingernails, she will be scarred, so she is given a special scratching stick to prevent this from happening. 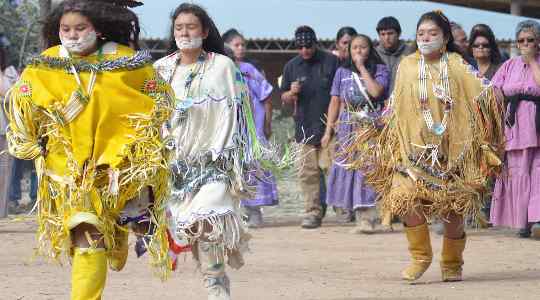 She also must maintain a serious demeanor because if she laughs a great deal during the ceremony, she is said to become prematurely wrinkled.

Beginning on the second evening, four or more crown dancers perform a dramatic set of dances, representing the Gaan mountain spirits, who are thought to create good fortune for the girl and those attending the ceremony.

The crown dancers and the girl dance on subsequent days as well, and the girl also completes a running ritual 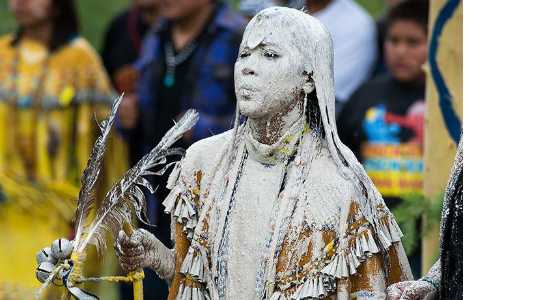 When the ceremony concludes after four days, the initiate’s supernatural powers come to an end, but she is then considered a woman and is eligible for marriage.

A girl who goes through the ceremony of transition into womanhood is believed to be provided with special blessings. It is not for the faint-hearted and is taken seriously by the young girl and her family. 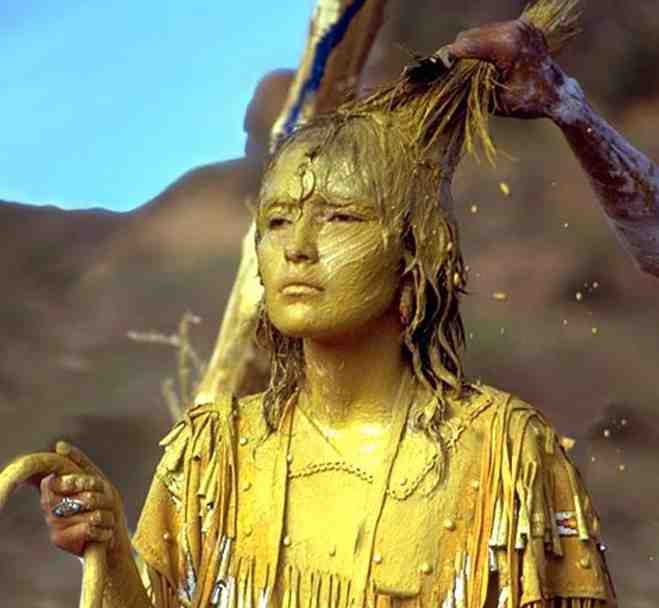 The selection of a godmother also involves specific steps. Indeed, the godmother is not given any warning as to when she will be asked and is asked in the hours preceding the sunrise. An eagle feather and a turquoise stone are often brought and given in appreciation.