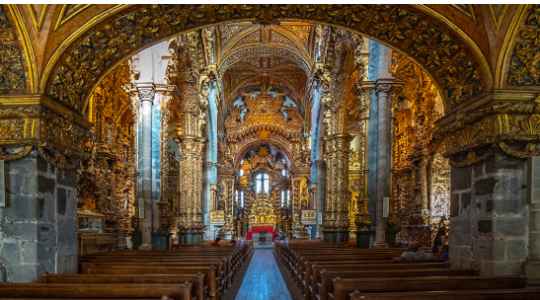 The Church of Saint Francis is the most prominent Gothic monument in Porto, Portugal, and also noted for its outstanding Baroque inner decoration. 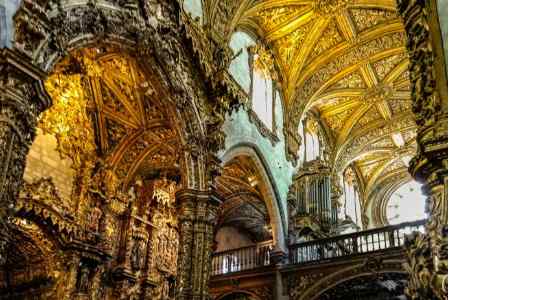 It has been estimated that 650 pounds of gold were used in the decoration of the interior of Saint Francis’ Church of Porto. The church is also decorated in floral motifs and exquisitely detailed wood carvings.

There is also a museum where you will discover precious centuries-old artifacts and catacombs holding the bones of religious servants.

Saint Francis Church is located in the historic centre of the city, declared World Heritage Site by UNESCO.

The Franciscan Order was established in Porto around 1223. Initially, the order was antagonised by the secular and clergy of other religious institutions, particularly by the bishop of Porto.

It took a papal bull, the Bulla Doelentis accepimus by Pope Innocent V, to restore to the Franciscans the plot of land previously donated to them. They began building the convent and a first, small church dedicated to Saint Francis of Assisi around 1244.

In 1383, under the patronage of King Ferdinand I, the Franciscans began to build a more spacious church. This new structure was finished around 1425 and followed a relatively plain Gothic design, typical for the mendicant orders in Portugal.

The general structure of the church has not been extensively altered, making São Francisco the best example of Gothic architecture in Porto.

During the 15th and 16th centuries, prominent Porto families chose the Franciscan for their pantheon. The Chapel of St John the Baptist is a notable example, built in the 1530s for the Carneiro family in Manueline style, the Portuguese late Gothic. 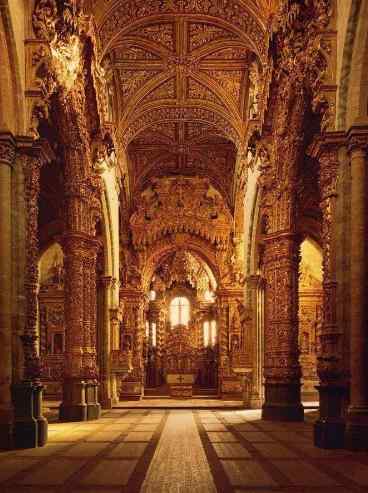 The main artistic campaign of the church was carried out in the first half of the 18th century, when most of the surfaces of the interior of the church, including walls, pillars, side chapels, and roof, were covered with Portuguese gilt woodwork (talha dourada) in Baroque style.

Particularly notable are the many Baroque altarpieces of the apse chapels and the nave, which are among the best in Portugal.

A fire, caused by the siege of Porto in 1832, destroyed the old cloisters. In its place, the Commercial Association of the city built the Stock Exchange Palace (Palácio da Bolsa), a magnificent example of 19th century Neoclassical architecture.