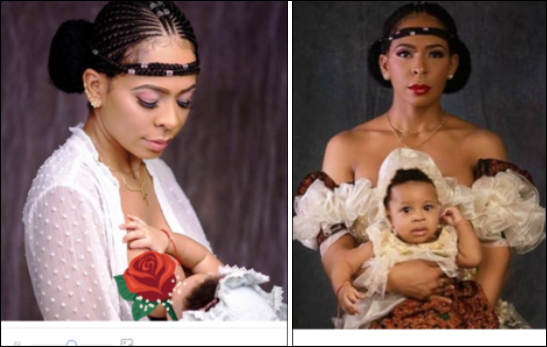 Former Big Brother Naija hoisemate and actress,Tokunbo Idowu, also known as Tboss, speaks about the good and bad side of motherhood and the rumoured paternity of her cute daughter.

Several weeks after her emotional outburst, following Internet trolls’ unpleasant remarks about her baby’s photos, Tboss who disclosed that she is very sensitive though she tries to ignore them at times, opens up in an interview with Sunday Scoop.

“A mother’s love for her child is unconditional. She can go to any length to keep her baby safe at all times. They say you don’t know how high you can jump until you are faced with a situation that requires you to jump. I am a mother and my child is my utmost priority.

“I think the reason people would not only troll me, but anyone at all, is because they lack love. I mean if you grew up in a love-filled environment and were taught the importance of self-love, I cannot imagine that you would act otherwise.

“You cannot give what you don’t have. They must be jobless and hurt people for them to going around looking for who to drag down. Many of them are jealous people who hate one because they assume that one has got life all figured out and just want to ruffle one up not knowing that one is simply taking one day at a time.

“And in my case, they know I can sometimes be super sensitive. Trust me, I do look the other way sometimes but I do believe that at some point, one has to give it back to them hot.”

The actress also insisted that she wouldn’t shy away from breastfeeding her child for fear of her breasts losing their firmness.

“I heard that’s a myth and I’ve honestly never worried about that. I did have other fears, concerns and questions about breastfeeding but that my breasts would sag? It never even crossed my mind. And even if they were to sag, my baby is totally worth it.

“I really wasn’t prepared to love someone so fiercely. When I held my daughter in my arms for the very first time, I knew what love really meant. I felt such a rush of emotions that you simply have to experience because there are no words to explain them.

“It’s a new chapter of my life and I have never disillusioned myself that things would stay the way that they were. Nothing stays the same; that’s just the natural order of things. And that’s fine. As long as I am healthy and my daughter is fine, then what’s there to complain about?

“Pre-pregnancy body was amazing but it’s gone and there’s nothing wrong with that. I housed a whole human being for almost a year, so it’s okay if it takes a while to bounce back but if I need to hasten the process, I would simply visit the gym or under the knife; or both. Why not?”