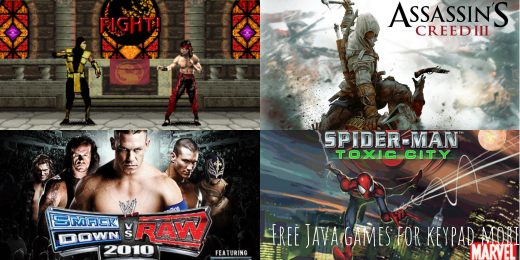 Are you a fan of retro games and are looking to start playing once more for some classic Java games? In my article of today I’ve listed the 50 most popular free Java games are available to download for playable on keyboard mobile devices, and maybe even on an Android device. Check this article to discover how you can play Java games on Android.

Spiderman Man: Toxic City is an mobile action game created by Gameloft in the year 2009. The game tells the tale of Peter Parker with his girlfriend Mary Jane, and his battle with his enemies, the Green Goblin, Rhino and other villains in the game.

Toxic City is playable on all Java-compatible Nokia devices, including Asha 2700, Asha etc., as well as other Java phones. The game is perfect to the 240×320 jar screen size.

Experience the most enjoyable gaming experience a Java game can give you in this action-packed game from Gameloft. Assassins Creed: Brotherhood is a game that focuses on Ezio the protagonist, who is required to kill high-profile people like Cesare Borgia Romulus and Lucrezia Borgia and more to end the evil influence that is the Templars within Italy.

The players are expected to help Ezio through the game in order to complete his goal. The game was released in 2010 by Gameloft and is available for Keypad-based/touchscreen mobile phones. (Nokia, Samsung, Tecno, LG, Motorola).

Diamond Rush is an action and puzzle solving game where the player enters an infamous castle dungeon in Bavaria seeking ways to get out of this mysterious temple. The game’s features differ depending on the phone model. It is however, most effective with Nokia Asha, Nokia C3 and the majority of Samsung and LG devices that run Java and a few itel and Tecno Java phones.

This game for free comes pre-installed for a variety of Java phones. If you don’t have one on your device then you can download the game here and play the game.

Bounce Tales java is one of the oldest and exciting mobile games. It tells the tale that takes place in Bounce in the fairytale Bean Land. A very special day when the earth’s hues began to fade away and living creatures living in the area were absent. Bounce in confusion, she decides to investigate, but is shocked to find a bizarre machine that was sucking up the colors of summer. After getting rid of the machine, other enemies are now making a mess within Bean Land.

Stop the bad guys and restore the once stunning colours in Bean Land.

Real Football 2012 is one of the most popular football Gameloft games available to Asha 200. The game you’ll find the top football features you could ever think of in a Java game. It has a short game, competition modes, tournaments, league competitions that are legendary, practice mode and do not overlook a multiplayer mode in which you can play online with your friends using Bluetooth.

Real Football 2012 java game is best played on the screen resolution of 320×240. It can be downloaded from Java games websites like Waptrick, Phoneky, and Dedomil. Download the game here to play it for fun.

Spiderman 3 Java game is one of the top Java games that you could play again. As with each other Spiderman game, Peter Parker is the main character. The mission of this particular game is fight his enemies, including the Green Goblin, Sandman, and Venom (Eddie Brock). Peter must also guard Jane, his love interest Jane from dangers.

Spiderman 3 allows the player to wear red and black suit in different stages of the game. There are a variety of tricks you can use such as pile-driver, web-sling and pile-sling to eliminate your opponents. The game is compatible with various mobile screen sizes , including 240×320. It also can be played on a wide number of Java-based devices. Download the game here.

Gangstar Crime City is one of the few open-world titles for Java mobile. Like the name suggests this city between Los Angeles and Miami is full of notorious criminal gangs. The goal of this game is take out all the criminals as well as their groups, and eventually be the ruler of LA. Its gameplay is reminiscent of the well-known Grand Theft Auto games, you’ll definitely be able to be entertained in this exciting action shooter Java game.

Gangstar Crime City runs smoothly on the majority of Java phones and displays beautifully in a 240×320-pixel screen size.

The most thrilling racing game is back with a roaring revival. This time, you’ll be taking part in a thrilling race with the top racers of the city. You must be the first to finish to win the prize and get the top scoring for you. The gameplay is exciting and comes with good music. You can race on the car or bike in the game.

There’s the Instant Play mode within the game, which allows you to participate in races that are quick and an Arcade mode in which you can begin your career on the field.

Oft abbreviated in the form of PES 2010, this game has some interesting features. Its style of play is distinct from the Gameloft’s Real Football. PES 2010 features an experience that is more authentic than other game that is based on Java.

It is possible to score stunning goals, similar to curlers, with this sport. There’s an UEFA champions as well as Europa league modes, cups of leagues, competitions, national tournaments as well as instant games. This game is very compatible for Nokia 2700, Nokia Xpressmusic and other Java phones with a screen resolution of 240×320 pixels.

Modern Combat 4: Zero hour is an action game published by Gameloft. Terrorists have taken a few world leaders hostage, and then smashed the United States with nukes. Your team is on mission to save the hostages as well as eliminate the culprit behind all these sufferings.

The game comes with strong assault weapons, including grenades and rifles. The only goal is to complete the game and earn an award of honour.

NBA Live 2010 is a basketball designed specifically designed for keyboard-powered mobile phones. The game was developed by EA in the year 2010. NBA Live 2010 delivers the most realistic experience of five-a-side basketball. With 82 seasons included in the game, you’re guaranteed to enjoy a long and enjoyable gameplay all through the course of playing the game on thirty licensed team.

Do crazy tricks and slam-dunks to defeat your competitors in NBA contests.

Ultimate Mortal Kombat 3 is possibly the best fighting game on Java mobile. The game was released by EA. The harrowing arcade game has a variety of game modes that you can play. To start your journey select your person from the list of MK heroes, including Lui Kang Sub Zero, Scorpion, Kitana, Sonya, and Cyrax. Shao Kahn, the ultimate antagonist is unlocked after you overcome all combatants at the difficulty level.

Every MK hero is unique and can stun opponents. Utilize your skills to defeat your adversaries and put an end Shao Kahn’s unstoppable power.

Mission Impossible 3 is a action shooter game in 2009 developed produced by Gameloft. The game lets you play in the role of Ethan Hunt, the famous Mission Impossible series character. You must fight your way through the huge hordes located at every point within the game. Also, you must overcome technical challenges to complete your mission within this challenging game.

This list would be insufficient without this game included. The story behind the game is based to The Mohawk Assassin Connor in the American Civil War era. Players must manage Connor when he is engaged in combat with his enemies in a deadly manner. The player utilizes flintlock guns bow, tomahawk, and muskets to fight.

The experience of gaming in this 2D Java game is fantastic. Simply download the game and have fun.

Real Football 2010 is one of the top football games developed by Gameloft that is designed for keyboard-based mobile phones. One noteworthy feature of this free Java game was its multiplayer game mode. It is possible to connect with players through Bluetooth and play the game. Additionally there are many exciting features included in this game which makes it a truly unique game.

When you play this sport, you’ll discover many of the old players from football such as Drogba, Gerrard, Lampard, Henry, Essien, David Villa, Totti, Cech Edwin van der Sar and many others.

All sizes of screens are supported in this game. You can play using any Nokia, Samsung, Motorola, LG, or SonyEricsson keypad mobile device.

WWE SmackDown vs. Raw 2010 3D is a 3D fighting platform game created by THQ. The game utilizes 3D to provide you with real-life graphics you can get from Java games. You can select among your most loved fighters such as John Cena, Edge, Rey Mysterio, The Undertaker and many more.

A variety of WWE fight events like SummerSlam, No Way Out and WrestleMania are included in this exciting fighting Jar game. Start playing now for no cost.

Select from the range of Java games for free in this article and experience an experience that is reminiscent of what older keypad or platform-based mobile phone games worked. If you’re running an Nokia, LG, Samsung or Motorola device you’ll still be able to play these J2ME games if the device you’re using is Java-powered.

If you’re not a user of one of these devices then you can look up for instructions on how to play Java games on Android with an emulator called the J2ME emulator for Android. Have fun and enjoy.

Iron Snout Unblocked Game To Play Online At School in 2023